A (Sort of) Book Review: Ever Ancient, Ever New

Posted on July 5, 2019 by centrestreetbaptist 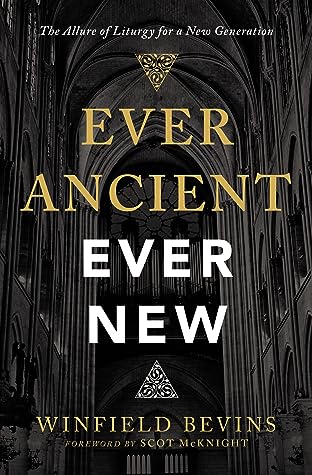 Winfield Bevins. Ever Ancient, Ever New: The Allure of Liturgy for a New Generation. Grand Rapids: Zondervan, 2019.

I was incredibly excited about this one. Sometimes when you look at a book you think “this was written just for me”. That’s basically where my mind was on this one before I dove in. Winfield Bevins, Director of Church Planting at Asbury Seminary, sought to depict something of the movement of millenials and younger GenXers back to high liturgical forms of Church. As I’ve noted elsewhere, even though I am part of free church movement, I absolutely love “high” liturgy type worship. and the Spiritual practices of these traditions (Roman Catholic, Orthodox, Anglican). I find the forms work really well for me, keep my easily distracted mind engaged, and are saturated by Scripture, beauty, wonder, and (this may sound odd) a logical structure.

On some levels, this book came up short (more below), but it did resonate on a lot of personal levels. The stories of folks discovering the beauty, rooted spirituality, and discipleship potential of liturgical traditions was reassuring to find. It’s good to know I’m not alone in this.

Ever Ancient, Ever New is divided into three sections: “Foundations” which looks at some trends observed in movements away from consumerist influenced evangelical churches to traditional, “high liturgical” ones; “Journeys” which looks at some of the reasons why this is happening; and “Practices” which provides some basic laying out of what these churches look like for those not familiar with the practices. Without being overly harsh on evangelical free church forms, he critiques the forms for their occasionally consumerist approach in which things are driven by the quality of the worship band, charisma of the preacher, and hip look of the worship space. In a culture where GenXers and millenials want more than a performance; they desire a community in which they are fully engaged participants, the forms of high liturgy can speak powerfully, as worship is intentionally structure to facilitate the participation of all voices with the leaders, each other, and most importantly with God.

What I found did not work is that it is primarily anecdotal, with no real hard data. Is this really a significant trend, or did Bevins find a few examples of this and from that suggest a general trend? Is this a trickle, a tsunami, or a leak in a dam about to busrt? I realize Bevins wasn’t conducting scientific research (though I suspect some data is available somewhere which could have been cited?). This is mainly an exercise in letting the stories and experiences of others be heard. But I’m interested in whether this is something isolated to a few pockets or real movement. The stories help personalize things, to understand motivations straight from the people involved, but perhaps the stories should be illustrative rather than the core. He’s asking why this is happening, without establishing what is actually happening.

The second issue I had was in the “Practices” section. It was quite shallow, giving just a few paragraphs which don’t really depict how and why these practices are done, just that they are done. For example, the description of Lectio Divina does not explain the four aspects (lectio, meditatio, oratio, contemplatio). I would have hoped for more on that. The section on practices, instead, is primarily focused on the intersections of worship and mission, especially the interest in social justice. This is good and important, but it doesn’t answer the question of where those liturgical practices come from, the biblical/theological underpinnings, why they matter, and how they can be done for beginners. Bevins leaves out a lot of the information on why and how the liturgical tradition developed the way it did. How did the Church at the time these traditions were established understand Scripture, theology, worship, prayer, the Eucharist, and their place in the world? Andrew McGowan’s outstanding work, Ancient Christian Worship examines these roots, and some of that would speak powerfully in Bevins work.

Overall, I think Bevins achieved his goal of sharing the experience of those who have discovered something eye-opening and live-giving in liturgical traditions. He allows the voices of those for whom this is their reality to speak without getting in the way and adding too much of his own commentary. He has written something which can be picked up and understood by a general audience, and because it comes from a publisher which usually produces material for those not of the high church tradition, it has the potential to engage an audience which may benefit from hearing these stories, and understand more of the history of worship and church identity.

2 Comments on “A (Sort of) Book Review: Ever Ancient, Ever New”