Posted on February 7, 2019 by centrestreetbaptist 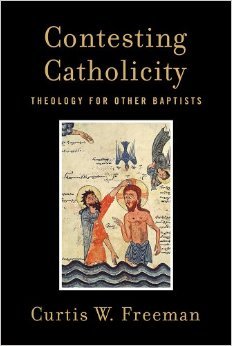 As I’ve noted elsewhere, I sometimes find myself not fitting in comfortably among Baptists, but still very much rooted and unmoving from my people. I know I don’t lean towards the more fundamentalist/conservative evangelical camp, and I’m not entirely comfortable among the “liberal”/progressive camp either. Sometimes those of us who don’t fit in either group get labeled the “muddy middle”, implying perhaps that we’re unclear, or wavering, or unwilling to take a stand one way or the other, or that we’re trying to be some sort of via media between two warring camps to avoid controversy. Curtis Freeman calls folks like us “other Baptists”, but seeks to develop a vision for Baptist theology which is neither “liberal” (I hate using that term for theology, but that’s another story for another day) nor fundamentalist, but is something other than an attempt to sit in between, but to move beyond that battle. Contesting Catholicity builds on earlier work by James Wm. McClendon Jr, Steven Harmon, and others trying to break free of the fundamentalist-liberal battles which have characterized Baptist theology since at least the 19th century, both sides of which Freeman suggests (echoing McClendon) are unsustainable.

Freeman explores Baptist history, to demonstrate that early Baptists attempted to chart a course within the stream of (emphasis on small c) catholicity, but as contesting voices within that community. Echoing Harmon, Freeman suggests recovering some of that heritage can provide a renewed vision of Baptist theology which is rooted in the historic catholic identity but distinctly Baptist. In part one, Freeman explores the current situation, the “sickness unto death,” which characterizes Baptist theological conversations and the alternate visions cast by the two camps. He suggests that the solution is to develop what he calls a “generous liberal orthodoxy”, which is not liberal in the sense of the common usage of that word as a pejorative label which refers to leaving behind traditionalism in favour of subjective, experiential redefinition of religious truth, but is liberal in the sense of making use of the tools developed in modern scholarly work to be put to use within the confines of confessional orthodoxy. This “liberal orthodoxy” is also “generous” in making space for ecumenical dialogue and resourcing from differing camps within, an also beyond the Baptist boundaries.

Part two then lays out some theological areas for building a foundation for Baptist theology. The areas he proposes for this foundation include: 1) a robust (Nicene) trinitarianism; 2) a vibrant priesthood of all believers (with a refined/clarified vision of soul liberty/competency); 3) a deeply communal ecclesiological space for doing theology (in contrast to the often individualistic trends of both fundamentalism and “liberal” theology); 4) a discerning approach to biblicism which allows room for “more light from the word” through a “communal hermeneutic”; 5) an “evangelical sacramentalism” which views baptism and the Lord’s supper not as “magical” but not as “mere symbolism”, which is to think little of them and makes them optional, but as actions performed in the presence of God which have an ontological impact; and 6) a willingness to rethink the relationship between baptism and membership, as the typical closed membership approach of requiring believer’s baptism by immersion for membership for confessing Christians, which reduces baptism to a means to join membership in the local church, rather than an entry into the death and resurrection of Jesus.

This book is incredibly encouraging and objectively well-written. Freeman presents extensive research in Baptist historical primary sources, from a variety of documentary sources (sermons, newsletters, tracts, books, confessions/faith statements, etc.) and perspectives (particular Baptists, general Baptists, Southern, British, etc) which develops a diverse picture of Baptists through the 400 years of our history. Freeman draws Baptist identity out from under the attempts to homogenize or revision the origins of the Baptist tradition. The final vision is of a theological framework for Baptists which taps into all the resources our history has at its disposal. The vision is robust, anchored in a solidly orthodox foundation, but also able to make room for conversations, clarity, nuance, and diversity in practice in order to respond to the needs “on the ground” for each local community- and the local community is very much at the heart of Freeman’s vision. Thus, this vision allows for greater ecumenical work with other traditions, while not losing a distinctively Baptist identity. Freeman does not seek to impose a set of “set in stone” doctrinal positions which should define Baptist theology, but a set of core principles which define the space for theological exploration and a vision for what Baptist theology can do and should be doing.

Odds are, this vision will rub both fundamentalists and “liberals” the wrong way, but I think that may have been the point- to generate a vision which is “other”. However, the risk in this is that the “other baptist” vision may simply turn a two party battle in a three sided battle. On the flip side, by developing a vision for “other Baptists”, Freeman clearly marks out the possibility of a theological space which is not stuck in between two parties, but is something else- not a muddy middle trying to survive in no-man’s land between the two sets of trenches refusing to take a hard stand. Instead “other Baptists” can present a robust theological vision which is not rigid, but not wishy-washy either. The vision Freeman offers needs to percolate and be refined some more, but it is a very helpful starting point for an important conversation. As an “other Baptist” myself, it is encouraging and vital to have this book at my disposal for framing my own theological vision, and leading in a Baptist congregation where theological specifics are diverse but all are seeking to faithfully live out our calling as contesting voices in the Church catholic.