Posted on April 20, 2018 by centrestreetbaptist 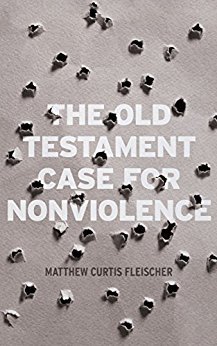 The Church has been wrestling for a while in an attempt to come to grips with the violence described in the Old Testament, and in particular with the fact that this violence appears to be not only permitted, but commanded by God. The command to Israel to commit large scale acts of violence towards city-states and Canaanite tribes as they entered the promised land to establish the Israelites in the land as the covenant people seems at odds with Jesus’ emphasis on love, and the New Testament depiction of salvation going out to all nations, making peace, and the final vision of Revelation of people from every tribe and language worshipping God. Many theologians have undertaken to vindicate God from the impression that he is (or at least, during a certain period of history, was) violent, and perhaps even genocidal.

Matthew Curtis Fleischer is not a professional, academic theologian. He is an attorney. The Old Testament Case for Nonviolence is not a scholar (or wannabe scholar) presenting a new interpretation of the Scriptures in order to revise or correct everything we think we know about the Old Testament. Instead, he takes the approach one would expect from an attorney; presenting expert testimony from theologians to a general audience to convince them his position is correct. This is therefore not a revolutionary book, but a condensing of recent work (scholarly and popular level) on the subject of the violence of the Old Testament, read in light of the New Testament and ancient historical context, for the benefit of a non-expert audience to see a more nuanced reading of difficult texts. His thesis centres around the notion of “incremental ethical revelation”; that though there is violence depicted in the text which God endorses and directs, that violence happens within a historical context where the rules of engagement by which Israel is instructed to operate actually demonstrates a movement which was an ethical improvement to the norms of the ancient world, and through the prophets and wisdom literature, the Old Testament moves Israel in a more nonviolent direction, which is fulfilled in the New Testament. But this vision is already laid out in the Old Testament, argues Fleischer. God does call for war against the Canaanite tribes to clear the land and be the covenant people in that land, but he instructs Israel to avoid the imperialist war machine mentality of other kingdoms; to not expand beyond the borders God provided, to avoid large standing armies and building up of weaponry, and trusting in military might for security. The prophets call the leaders of Israel to turn away from shedding innocent blood, and establish justice. The wisdom books, especially Proverbs, speak of violence in negative terms.

Fleischer is, as noted, not making a new case, but bringing together the work of other theologians, so he leans heavily on key thinkers, most of whom come from, or draw heavily from Anabaptist nonviolence traditions (Copan, Yoder, Sprinkle, Boyd, Zahnd and several others). But is his case convincing? At times, yes, it is. He is correct in noting that God places strict limits on Israel’s abilities to make war, prohibiting a standing army, discouraging Israel from establishing a king “like the other nations” (1 Sam. 8) to curb the temptations towards expansionism, nationalism, and authoritarian government. It is also correct that Jesus does “fulfill” the Law, not by setting it aside, but by setting higher bars, and placing the interpretive emphasis on the holiness code of Lev. 19 and the command to “love your neighbour as yourself” and to take the higher road and not demand eye for eye retribution, but turn aside from violence, which was permitted, though limited to one to one.

But there are holes in Fleischer’s case. I think he’s accepted some problematic interpretations of certain narratives. Two examples stand out; first, he argues that Israel was an “underdog” when invading Canaan; that the Canaanites had superior weaponry and sophisticated armies, and Israel was a small, under-equipped group. Yes, Jericho had walls, but if we accept the testimony regarding Israel’s size from the Torah, and note that Canaan was essentially small, independent city-states, the largest of which had populations in the thousands or possibly tens of thousands, Israel is not really an underdog. Fleischer applies the same underdog narrative to David and Goliath, which is simply misleading. The narrative actually implies that David’s sling is not a liability, but a strength, and Goliath’s armour is not a sign of his superiority, but the thing which holds him back. What we see instead, is a wise young man bring a deadly projectile against a slow moving, and foolish man in cumbersome armour. In other words, David brought a gun to a knife fight. He’s hardly the underdog except in the perception of the people around him. We’ve created these images in our flannel-graph Sunday School mentality that says “trust in God and he will help you overcome obstacles that seem impossible”. But the text argues that wisdom allows you to see potential vulnerabilities, and arrogance blinds you. These narratives actually work against the case Fleischer is making, since they both show large scale violence glorified. Let’s not forget what happens after Goliath is brought down; a massacre involving mutilation of the Philistine corpses which is celebrated by the narrator. He also neglects to really wrestle with the prophetic depictions of God’s violence in judgment. Yes, the prophets called for Israel to turn away from shedding blood, but they also anticipate significant carnage when God’s judgment is finally brought to bear on the nations. Even Jesus and the Apostles anticipated that God would ultimately bring judgment against sin, and that his response would involve acts of violence. So, there is still some glossing over a lot in Fleischer’s case.

But perhaps the weakest aspect of Fleischer’s argument is the final chapter, in which he asks questions about biblical authority, and though I can sympathize with him to a certain extent, he has pushed beyond what evangelicals would consider an proper view of authority of Scripture. Yes, the bible is not a person of the Trinity, but it is also a product of revelation to humanity of himself and his work in the world. So while the Old Testament confronts us with things which we may not like, our approach to the text should be one of allowing the text to say what it says and be what it is. If something doesn’t fit our bigger narrative we adjust our narrative, not the meaning or authority of the text.

In terms of style, it is meant to be suited for a broader audience, so it isn’t highly technical. Since he’s building a case as a attorney would in legal proceeding, he does sometimes repeat things to drive home a particular point, but at times this makes the book more lengthy than needed. Given it’s intended audience, more brevity would have been welcome (comes in just under 250 pages). Added to this, the fact he is bringing together the words of several authors on the topic, including several long, paragraph length quotes, things end up becoming a bit drawn out. But the most problematic issue on style is the use of end of chapter endnotes. Given the number of citations, footnotes would have been a significant improvement.

Overall, this book serves it’s intended purpose, by bringing together key, relevant witnesses on the side of a nonviolent reading of Scripture. The arguments and authors he draws from are relevant, and arguably the best sources on the subject. The case is laid out in a way that makes it easy to follow the development of his thesis. He leads as an attorney would through the main points to build an argument. He doesn’t present the counterarguments of those who disagree extensively, but occasionally notes opposing views, and does so charitably, and avoids the ad hoc and ad hominems too often employed. For those seeking a summary of the case without diving into large tomes like the recent work of Greg Boyd, this serves as an accessible and fair presentation of the evidence in favour of this view. I have significant sympathies for most things Anabaptist, and though Fleischer is apparently from a Nazarene/Wesleyan background, many Wesleyans and Anabaptists (and even a few Calvinists, like Preston Sprinkle) are finding common ground on this subject. I wouldn’t say his case is without weaknesses, and it does need to be nuanced, but it is a worthy presentation of his case.

*An advanced reader copy was provided by the author in exchange for an honest review. Thanks to Matthew and to his publisher.

← Christ at the Centre
A (Sort of) Book Review: Contesting Catholicity →