Posted on April 27, 2017 by centrestreetbaptist 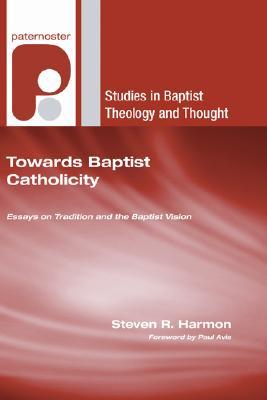 There are objectively good books (well researched, beautifully written, well structured, etc), and there are books that truly resonate with you personally- which address the exact thing you need addressed, and sometimes you may even find books that are both. This one is both for me. Steven Harmon has written the exact book I needed to read at this point. And I don’t just say that because we’re “friends” on Facebook and I am pretty sure he’s going to read this. This truly is the book I needed in my current context, and it is truly superbly written. My hope is to write a follow up piece to this review which unpacks some of the more personal context surrounding why this book resonated the way it did, but that would not fit into a review of the book itself.

Towards Baptist Catholicity is a collection of various essays, most of which come out of prior papers and lectures Harmon presented, now collected together and reworked to be coherent around a single topic: the inherent value in Baptists recovering tradition (particularly from patristic sources) as a source of authority and direction to bring revitalization to the Baptist vision and movement. Harmon demonstrates how early Baptists sought to maintain a connection to antiquity and included resonances of the ancient creeds in their confessions of faith (using specifically Nicene rather than biblical vocabulary) consciously placing themselves within the historic, catholic, apostolic tradition, albeit as voices of dissent against the then present state of the Church. Later Baptist confessions began removing these explicit resonances, or in some cases, ditching confessions and creeds altogether in favour of a “no creed but the bible” approach to theology. In doing so, the Baptist movement developed under an increasing influence of modernity, and the triadic narrative Gospel (the work of God in history through the three persons of the Trinity) was displaced by a Gospel of intellectual assent to a collection of more abstracted doctrines extrapolated from newly developed methods of exegesis (this influence manifested in two separate directions within protestantism; fundamentalism and “liberal” theologies equally drinking from the same well). Harmon’s suggestion is that as modernity continues to shift away from the Enlightenment ideals, the narrative forms of traditional orthodoxy and catholicity, and the means of communicating that theology liturgically, can and should be recovered as a guide for the Baptist movement, shifting from its position as dissenters from outside of tradition, to dissenters within the catholic tradition. We need not become Catholic in the sense of Roman Catholic, but develop a sense of Baptists as part of catholicity- a “thick ecumenism” which draws heavily from the broader church rather than reduced to the results of individualistic modern exegesis.

Throughout, Harmon shows his skill as a historical theologian, digging deep into early English Baptist confessions and the changes which come in later Baptist confessions (the Philadelphia Confession of Faith, the New Hampshire Confession of Faith, and the various revisions of the SBC’s Faith and Message). He also digs into his speciality: patristic sources, as well as several modern theologians who sought similar recovery of patrisitic sources for the 20th and 21st century church (Oden, Barth, etc.). The primary source research is stunning, as is the frequent engagement with secondary sources from a variety of perspectives (though at times perhaps a bit heavy on folks with whom he agrees).

Harmon also includes considerable personal reflection from his own experience within the Southern Baptist Convention (SBC) which went through tremendous conflict while Harmon was in the theological education process. That conflict ultimately saw a more conservative demographic take over leadership and reshape the identity of the denomination leading to a large group breaking with the convention to form the Cooperative Baptist Fellowship (CBF), with whom Harmon is currently affiliated. The concluding chapter addresses the question “what keeps you from becoming Catholic”; a reflection on why Harmon remains part of the Baptist tradition while still pushing for a development of catholicity within that tradition rather than change affiliations. My own thinking and experience has been similar to Harmon’s, and I hope to share some of my own thoughts in the follow up piece. Harmon’s conclusion is that Baptist identity is not something to be shed easily. He identifies some reservations around Catholic, Anglican, and Orthodox practice and doctrine, which he argues are important, but would not ultimately be insurmountable for him to make a shift. For Harmon it is the ecclesial identity which keeps him where he is; he was formed and shaped within a particular tradition, and moving from one body to another would require breaking of fellowship; to become Catholic is to sever a relationship with Baptists, to break communion, and in essence assert the body which discipled him to be a false body. He concludes that a far better way forward is not to break with one and join another. Instead he suggests; “before the separated churches can move towards visible unity, they must first go deep within their own traditions in order to recover elements of catholicity that once characterized their own churches but have been subsequently neglected.”(202) In other words, the unity of the Church as a whole cannot be achieved through individuals severing ties with their formative traditions, but through a consistent reflection on the way in which one’s community has moved and developed, and a push to recover an identity as part of the catholic church. By revisiting the sources of Christian tradition, and looking at the means by which the Church communicated its faith in early catholic expression (liturgy, calendar, eucharist, etc.) Baptists can recover an identity within a tradition flowing out of and in communion with the Church through history, rather than a voice of dissent distancing itself from everything which came in between the Apostles and the present.

Harmon’s challenge is an important one, not just for Baptists but for all protestants- to think deeply, creatively, and critically about what the ramifications of our break with tradition and catholicity really means for us. The refusal to accept tradition as a source of authority in favour of a “no creed but the bible” approach has consequences, some of which are quite harmful. It fails to recognize the role and impact of individual interpretation. Harmon includes a “case study” of sorts highlighting the patristic exegesis of the Epistle to the Hebrews and how many modern conflicts, especially when Calvinists and Arminians examine Hebrews 6:1-8, could potentially be rerouted, because the text in patristic exegesis never produced the same conflicts, because they approached the text differently. The “no creed but the bible” approach has proven to have fracturing effect among evangelicals rather than a unifying one. Harmon suggests that the tradition of the Church can possibly assist in finding unity not in uniform interpretation of Scripture, but in the core narrative expressed in the early creeds. By recovering this catholicity by going back to the creeds, the church year which walks through the narrative each year, increased frequency of the Lord’s Supper, and other aspects which were part of early Baptist identity, but later cut out, we can potentially bring a renewed sense of unity to a fractured group.

I would certainly place this into the “required reading” category for Baptist leaders. Harmon’s voice is one which, if heeded, I believe can make a difference in drawing people back together. The individualism, dissension, anti-traditionalism, “chronological snobbery”, and in some cases anti-intellectualism/fundamentalism often evident in recent (mid 18th century – present) Baptist thought is confronted with gracious, constructive, and highly intelligent reminders of our identity and a vision of what can be recovered and built on. The work begun in this book (and by other Baptist theologians who have worked closely with Harmon on some join statements included as appendices) can help us chart a course towards a renewed, constructive, unified identity which will be of great benefit as we seek to respond to the challenges of the shift in our cultural context.

← Book Review: Paul and Gender
Why I Am (Still) a Baptist →