Book Review: Compassion and the Mission of God

Posted on July 22, 2016 by centrestreetbaptist 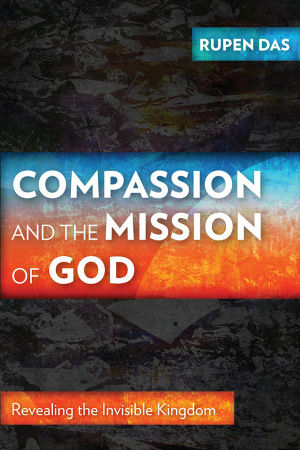 Objectively reviewing books written by acquaintances, colleagues, and friends is always difficult to do. This is eased considerably when the work they’ve produced is undeniably really, really good. Such is the case with Rupen Das’ new book, Compassion and the Mission of God. Rupen gave me a copy when he came to speak at Centre Street in May. Rupen Das and his wife Mamta are our partners in mission (PIM) through Canadian Baptist Ministries, currently working out of Amsterdam on development and relief projects through the European Baptist Federation. His work focuses considerable attention and resources on the Syrian refugee crisis both in Europe as refugees flee the Middle East, but also in the Middle East itself through partners like LSESD, and local congregations on the ground. I first met Rupen in Beirut, Lebanon in 2013 when I was there to see first hand the amazing work happening through Baptists in Lebanon. After returning home, and sharing about what is happening, Centre Street enthusiastically decided to make Rupen and Mamta our new PIM, as Colin and Karen Godwin were coming back to Canada with Colin taking up a new position at Carey Theological College in Vancouver.

Compassion and the Mission of God centres around the questions of integral mission- how it is that care and concern for the poor relates to the proclamation of the Good News. It would not be disputed among Christians that the Church should be engaged in charitable work; using our resources to help those in need. But what is the theological grounding for that? And where does the work of development to alleviate not just immediate concerns, but systemic issues of poverty, insecurity, and lack of access to things like education, medical care, etc. fit into all of this? Is that the work of NGOs or government aid? Or does biblical theology place this as a major concern for God’s people? Rupen Das argues that all of these things are part of the biblical picture of the Kingdom of God.

All of this flows from the prelimary question (p. 9-12) why does the bible seem to commit so much time, and reveal such a deep concern for the poor? If the mission of the Church is focused on the issues of redemption from sin through repentance and faith, why does the care for the poor still have such a seemingly central place? How are these things connected? Chapter 2 frames the discussion, by discussing hermeneutical concerns, and surveying the key common conclusions drawn by Christians of different stripes. Then in chapters 3, 4, & 5, Das examines the biblical text’s consistent call for concern for the poor (The Old Testament, the Gospels, and the Epistles and Early Church respectively) and which inform Christ mission. Das demonstrates that throughout the entirety of Scripture concern for the vulnerable is a key component of justice and righteousness; that God’s concern is care for his creation, and we as his image bearers must show the same concern, especially for the poor and vulnerable.

Chapter 6 deals with theological challenges- defining the Gospel (which Das connects very closely with the Kingdom of God coming on earth, thus involves a strong sense of reordering God’s creation according to his design and character) and the influence of various eschatologies on the practice of relief and development, in particular the ways in which dispensationlism downplays the need to steward creation and develop communities since the time is close at hand for God to destroy the planet and start over. Das argues against this depiction, instead demonstrating that God’s renewal of heaven and earth is close at hand, and we are bring the future vision of the new creation to bear in the present as part of our witness to life in the age to come.

Chapters 7-9 look at the influences on modern mission; liberation theology, fundamentalism, the Lausanne Covenant, and the Micah Declaration, and how the notions of what mission in the world looks like, shifting from a colonial mindset towards integral mission- a balanced approach of word and deed in sustainable ways which preserve dignity of indigenous cultures- and the development of a mission focused on transformation through witness as both proclamation of the Gospel and the tangible outworking of the message of the coming Kingdom of God through justice, care, relief, and transforming communities to places where God’s care and concern for the poor is lived out.

Chapter 10 then develops the notion of the character of God as the basis for all of this. Das argues that because God creates out of his own goodness and continues to extend compassion to his creation, this is the theological anchor for the integral mission pattern developed in chapters 7-9. Ultimately our call to show care and concern and to work with communities and individuals to develop and just and caring pattern or system is a reflection of who God is.

Compassion and the Mission of God is perhaps the best thing I’ve read on this topic. Thoroughly researched, anchored in solidly biblical witness, and good systematic and hisorical theology, and effective practice of experts in missiology, Das doesn’t just regurgitate the already well established notions and practices, but draws various streams of thought together, critiquing the flaws honestly but graciously, and affirming the helpful aspects, and also then putting his own contribution on top of that, moving the conversation forward. Das is not trying to reinvent the wheel, but rests on the fine work of Stott, Newbiggin, Bosch, Niebuhr, Sider, Yoder and others. But he also brings to bear his decades of work in the field of community development and disaster relief. He weaves together good biblical theology, with missiological principles, and first hand experience. You are fed in multiple ways, and challenged in a very real sense to fit various pieces together in an integrated theology, rather than having theology on one side and mission as something only somewhat connected on the other.

Stylistically, it is clearly and methodically composed. The central argument is developped in a logical way, and doesn’t get lost in tangents. All the pieces fit together in a way that makes sense, and makes the point clear. In just 200 pages, he is able cover a whole lot of ground, because the focus is specific, and he stays on task. To draw together a biblical theology of mission, a systematic theology of mission, with historical development of mission into a concise volume without making one feel like something is missing would seem like a insurmountable task, but I think Das has managed just that.

Perhaps it’s just my own bias coming through, but at every point I found myself nodding in agreement, and affirming the argument being presented. I would wholeheartedly back Das’ vision of mission which reflects the Kingdom of God breaking into our world. The alleviating of suffering and brokenness caused by poverty, systemic injustice, disaster, oppression and violence is a steady and persistent thread in the biblical text. It’s a central focus of the early Church’s work. In no way can we separate the work towards care and concern for the vulnerable from the proclamation of the Gospel. This really should be required reading for Churches, parachurch groups, seminarians, and denominational bodies. In a globalized world, with the technology and opportunities we have in front of us, we can do far more to alleviate suffering than was possible in the past. Our reach has extended considerably, and Das has provided a solid theological foundation for developing a strong and potent witness which can be worked out in a variety of different situations and in a variety of different ways.