Posted on July 20, 2016 by centrestreetbaptist 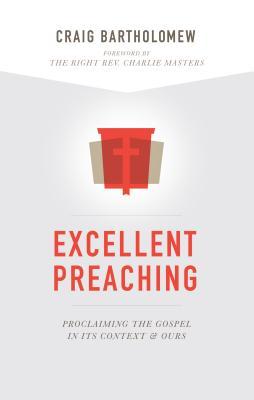 Preaching well is a goal of every Pastor. But what does excellent preaching look like, what does it do, and how do we do it? That’s the topic of Craig Bartholomew’s small book Excellent Preaching. The goal for Bartholomew here is to present preaching as the task of being faithful to the biblical text by reading it in it’s own context, but working to translate the text’s purposes for a 21st century context. Bartholomew argues that often preachers focus on one of these tasks or the other; being exegetically deep or being culturally relevant and applicable. Excellent Preaching challenges the preacher to be both, to take faithful exegesis seriously, but to then take the next steps to present the meaning of the text in a way which connects to the context of the audience of a given sermon; this is what the text means in its original context and this is what the text means for us here and now. Bartholomew uses the analogy of “landing the plane”. A sermon needs to get from its source to its destination. But how does it do that? Bartholomew notes the difference between a lecture and a sermon (12). It is not meant to simply convey information and the results of research, but it is also not meant to be simply emotional, to tell a good story or make people feel good. Instead it is meant to bring about transformation of the audience- that’s the destination. Bartholomew draws from his earlier research on the Scriptures as a grand narrative, and suggests a sermon should connect the text to the congregation to help them locate their place in the larger narrative of the Gospel picture of creation-fall-restoration-consummation. The sermon should therefore bridge the gap between the biblical world and the present situation.

Brevity can be a very helpful thing. Sometimes, more needs to be said. But Excellent Preaching says what it’s meant to say in a compact, no-words-wasted, straight to the point form. At only 68 pages before the appendixes, bibliography, and index, there’s no meandering here. Bartholomew says what he wants to say, and doesn’t beat around the bush (I’m sure there’s a lesson in this for preachers like myself with a reputation for brain dumping, and being a little long-winded).

The thrust of the book is of course, quite correct. I would wholeheartedly agree that our preaching should be faithful to the biblical text and also presented in such a way that it proves to be relevant to the life on the audience to which one is speaking. The reminder to preachers needs to be reiterated- the purpose is not to provide a theology lecture, nor is it to simply serve platitudes that tug on heart strings, nor is it to be a self-help presentation. The sermon exists to bring the biblical text to the people in a way which allows them to see new ways to live out the teaching. Bartholomew challenges preachers to make the study of the text a primary concern, and challenges churches to ensure their leaders are able to devote themselves to the ministry of the word.

Bartholomew’s use of secondary sources is generally helpful. He leans on the experts, and frequently incorporates the work of notable thinkers. Bartholomew is very much Reformed leaning, so most of these sources are from other reformed minded folks (Stott, Barth, Newbiggin). Perhaps some more folks outside his own tradition might have been helpful to round things out, but the number of interactions with other sources in such a short, popular level work is commendable. It’s engaged, researched, and grounded in established work by experts in the field, and not simply anecdotal. But it also adds something to the conversation, by incorporating the Gospel metanarrative as a means to draw hearers into the text.

Bartholomew helpfully gives a few examples of how to do this, by selecting a few texts and showing how he would go about making this connection between the text world and the present (54-66). For each of those texts, he demonstrates the key telos of the passage- the heart or goal to which the text points, and how to draw that out and make it relevant to the new situation of the present. One example: Gal. 1:10-2:21 is his first text, which he identifies as having a key telos around Paul’s apostolic authority, which was being challenged by certain teachers trying to “Judaize” the newly converted Gentiles in Galatia. So what does the imposition of circumcision have to do with the present context? The issue to focus in on, according to Bartholomew is authority. Living in a culture which highly values independence and is suspicious of authority, this text can speak into the situation to balance things out- the extremes of oppressive authoritarian structures and complete lack of accountability are both bad. Paul’s challenges around authority are different from more present struggles, but can inform the present discussions.

Because it does what it’s designed to do, and makes one specific argument, and the argument is a valid one, the criticisms one can make here are going to be stylistic issues. The first problem is in the first few pages, Bartholomew in calling people to avoid the two pitfalls of preaching noted above, uses unfortunately overly polemical and overly generalized language- conservative evangelicals tend towards the more exegetical but stuck in the biblical world, and “liberal” mainliners are stuck in the attempts to be culturally relevant, but are ignoring the biblical text. This over-generalization can potentially fuel hostilities and conflict between different traditions. It may have been helpful to nuance this a bit more. Many so-called mainliners are excellent and dilligent exegetes. Similarly, there are many evangelicals who are more focused on being relevant and appealing to the contemporary culture to draw in larger crowds. Obviously in a condensed space it’s hard to be nuanced, but more could have been done.

Second, the “Landing the Plane” analogy sometimes works, but sometimes doesn’t. Analogies are good, but become distracting when pushed to far, or when they feel forced. The captain, cargo, airport, view from arrivals, etc. distracts from the main thrust of the book, and Bartholomew expends too much effort trying to make the pieces fit into the image. Perhaps if the book was a tad longer, connecting the argument to the analogy could use more page space.

The other question one is left with is the role of preaching within the local church gathering. In some traditions preaching is something which, in terms of the amount of time given to it within the overall allotment within gatherings, receives less focus. Should the preaching be given less time so as to make it easy to retain, but also to allow the gathering to focus on acts of worship in song, prayer, sacraments/ordinances? How should the preaching connect with the other elements of the worship? The rest of the service should be in mind when framing a sermon, but how? Bartholomew doesn’t explore this.

Finally, Appendix B is an expanded Apostles’ Creed which is somewhat strange. It doesn’t lend much to overall impact of the book, so it’s placement here is a questionable choice. Also, unilaterally modifying a Creed is something which one has to wonder about.

This little book is a helpful tool for Pastors, and anyone who is invited to speak from the pulpit. It clearly and simply articulates a central thesis, and provides some helpful “how to”. Bartholomew effectively calls Pastors to renewed focus on good exegetical practices, and commitment to deep study of the text of Scripture, while also encouraging those who preach to make the message engage with the real needs, concerns, and challenges of contemporary life. Excellent preaching should be something we value in our congregations, and the little volume is a welcomed, easy-to-read resource for those called to speak into the life of the local Church.

*This book was provided free of charge in exchange for an honest review. Many thanks to Lexham Press and Jessi Strong

← A (Sort of) Book Review: Church History for Modern Ministry
Book Review: Compassion and the Mission of God →