A (Sort of) Book Review: Mending a Fractured Church

Posted on March 31, 2016 by centrestreetbaptist 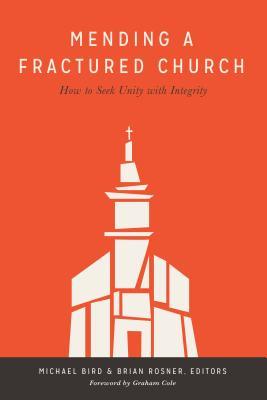 It’s no secret that Christians disagree- sometimes with considerable harshness. It’s also no secret that the New Testament issues strong calls for the unity of the Church, and for graciousness and charity over disputable matters. But what are the non-disputable matters? How do you ensure that the discussion of disputable matters is charitable and does not lead to breaking of the unity? Mending a Fractured Church is meant to bring biblical, theological, and historical considerations to bear on these questions, and promote a greater sense of unity among Christians who still differ on some issues without losing or compromising essential doctrines.

Mending a Fractured Church brings together a collection of scholars (almost all of whom are faculty at Ridley College in Australia; Peter Leithart being the exception) to examine the biblical precedents for handling disputes about doctrine or practice, as well as looking to Protestant history and contemporary challenges posed because of a plurality of backgrounds in contemporary churches. The authors attempt (as the subtitle suggests) to set precedents for how address theological concerns in ways which preserves the unity of the Church but doesn’t compromise doctrinal integrity.

The first essay (Andrew Malone) seeks to set the parameters: what do we mean by “disputable matters” and what does the New Testament give us in terms of defining the unity of the Church. The second (Lindsay Wilson) explores the dispute which is described in Joshua 22 (a dispute about the placement of an altar) and examines what was done well, and what was not done well in the case, and how we can avoid problems in conversations about perceived violations by other Christians. Third, Brian Rosner examines Paul’s instructions in Romans 14 concerning disputable matters, which centres around the issue of food- more specifically meat offered to idols. These instructions focus around accepting others who disagree on specific issues of practice which are as deemed non-essentials. Paul argues the believer is free, but ought to willingly curb the expression of freedom for the sake of accepting those who are not fully matured in that freedom. Fourth, Michael Bird examines the Johannine Epistles, noting that in the congregations to whom these letters are addressed, there had been a “parting of the ways” but this is not a justification for schism. Bird astutely and bluntly states “we need another denomination like we need another Babylonian captivity”. Bird argues that our commitment to the one Church ought to prevent us from leaving where we are, and “the good guys” should avoid being the ones doing the leaving (more on this below). Fifth, Rhys Bezzant examines Protestant history for examples of disagreement done poorly (using the Puritans mainly who held their church order as the only valid option and others as not part of the true church) and some done well (early evangelicals, particularly in Europe, who allowed considerable space for freedom of conscience on non-essentials, demanding unity around the central marker of the Gospel). Finally, Peter Leithart unpacks the challenges confronting church in the present, especially as immigration creates a plurality of cultures, in which Christians from various parts of the world bring particular practices and forms from one place to another. How does the Church accommodate these variations.

This book is needed. The fracturing of the Church into a seemingly ever-growing number of denominations is a disconcerting development in our history as Christ’s Church. The Creed’s declaration of one Holy, apostolic, catholic church is at odds with the fragmented collection of denominations we see in the present. It seems we are divided more than we are united. The Church needs our leaders to lead the way toward greater unity, even if we continue to exist in various traditions. Setting some groundwork for that movement towards unity is something most Church leaders would agree needs to happen. We need precedents (especially biblical, but also historical) to set a framework to launch inter-denominational conversations. We need some folks to begin making big moves in a positive direction. These essays lay out some potential guidelines, biblical principles, for us to begin conversations from. Realistically we can’t expect any book of this type to solve all our problems, but we need some folks who are broadly respected, a category which among evangelicals, I believe, includes Michael Bird and Brian Rosner, who can be catalysts for further development. So while not the be-all-end-all, this is a good place to start; evangelical scholars bringing Scripture to bear on the disputes between “camps” within the Church.

As with all collections of essays, there are highlights. Given the fact that Romans 14 is perhaps the most extensive treatment in the New Testament on the issue of overcoming disputes, one would want any discussion of that passage to be rich, challenging, and central to the overall impact of the book. Rosner does achieve that. He capably points to Paul’s approach to the division over meat. He points that Paul calls upon the mature to curb their freedoms for the sake the less mature, so that offense may be avoided to keep the unity of the Church.

Rhys Bezzant’s essay was a pleasant surprise. He graciously, but effectively critiques the Puritan tradition, which, in a sense, became what it hated in the Roman Catholic Church- demanding that it alone was the true Church based on the markers of Church structure. He points to the early evangelical movement, and specifically the Evangelical Alliance, as a positive model, which made allowance for considerable disagreement, but provided a central core which could unite groups with varying opinions on non-essential matters.

One thing lacking was a proposal of some concrete examples of non-negotiables and disputable matters. There are a few bits in Bird’s work on the Johannine Epistles (incarnation, atonement) but what constitutes a disputable matter? Depending on who you speak to, they will define this differently. Is eternal torment in hell a disputable matter? Is the understanding of the model of atonement a disputable matter? Is women in ministry disputable? Is modes of baptism disputable? Is inerrancy disputable? How do we settle disputes over what is and isn’t disputable? Bird also suggests the “good guys” should not be the one’s to leave. Those who differ from the orthodox should be the one’s to walk away and the orthodox should allow for that if necessary. But the challenge comes with the question “who are the ‘good guys’?” How do we determine who has the high ground? When both sides insist on their position as the right one, and both camps assume they’re the “good guys”, this suggestion doesn’t provide much resolution.

The other key issue unresolved in the question of “how do we do this?” Moving from the theoretical belief that the Church should be one and not divide over disputable matters to actually mending divisions which have occurred, and preventing fractures which are beginning to form to lead to division, is a very real struggle, which this book does not address, which may have been helpful. An additional chapter or chapters on application, perhaps written by pastors or denominational leaders who have been part of reconciliation or conflict resolution would have been an appropriate here.

In a period in Church history when disputable matters are fragmenting the body of Christ, it’s time for “big moves” toward unity. The unity of the Church is certainly placed, by Scripture, as something created by God in Christ, which we are called to steward and protect. For instance, Ephesians 2:14-22 (NRSV) says:

For he is our peace; in his flesh he has made both groups into one and has broken down the dividing wall, that is, the hostility between us.15 He has abolished the law with its commandments and ordinances, that he might create in himself one new humanity in place of the two, thus making peace, 16 and might reconcile both groups to God in one body through the cross, thus putting to death that hostility through it. 17 So he came and proclaimed peace to you who were far off and peace to those who were near; 18 for through him both of us have access in one Spirit to the Father. 19 So then you are no longer strangers and aliens, but you are citizens with the saints and also members of the household of God,20 built upon the foundation of the apostles and prophets, with Christ Jesus himself as the cornerstone.21 In him the whole structure is joined together and grows into a holy temple in the Lord; 22 in whom you also are built together spiritually into a dwelling place for God.

While Mending a Fractured Church won’t solve the problem of division (I’m sure no one is under the illusion it will), it is a strong push to begin or perhaps further build on a very serious, and much needed conversation- how do we maintain unity of the Church and maintain our convictions about doctrine and practice? So I commend Bird and Rosner for taking on the proverbial elephant in the room. This small volume succeeds in moving the conversation forward. The conversation will of course require more work. But each step towards a goal of greater unity is a good thing. The Church needs to be always reminded of the centrality of unity of Christ’s body in the New Testament. This call to action is a welcome one.

*The publishers supplied a free copy of this book in exchange for a review. I am thankful to Lexham Press and Jessie Strong for the opportunity to read and engage with this book.