A (Sort of) Book Review: The Prophetic Imagination

Posted on January 15, 2016 by centrestreetbaptist 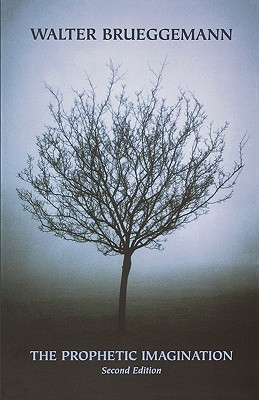 Few Old Testament scholars have been able to capture the liveliness of the Hebrew Scriptures the way Walter Brueggemann does. When it comes to literary artistry and spirituality of the Old Testament, Brueggemann is arguably the best in the business. He has a keen eye for the storytelling methods, spiritual and emotional context and impact of texts, and the power contained in them which is unleashed if we can really get inside them.

The Prophetic Imagination is probably Brueggemann at his best. Reworked in 2001 to bring his work to bear on a changed historical context (the original is from 1978, so a lot has changed in the world since then) this book is designed to be a guide for those seeking to capture the method of Old Testament prophet as a model for prophetic ministry in contemporary life. Brueggemann identifies the two key tasks in the ministry of Moses, Isaiah, Jeremiah, Ezekiel and other prophets: “prophetic criticism” and “prophetic energizing”.

Prophetic ciriticism, argues Brueggemann (ch. 3), is to speak or through symbol live out a declaration that the prevailing culture is a false ideological construct which cannot stand. The prophet is called to delegitimize and reveal the dismantling of imperial ideology or “royal consciousness” (the way of Pharaoh, Solomon, Herod, Ceasar) with its superficial appearance of affluence, forced labour, and formation of a civil or royally sponsored (and thus controlled or at least controllable) “static religion”. This criticism happens through the prophet vocalizing and/or living out the laments and groans of the people (“The Embrace of Pathos”)- by speaking into and from a place of communal grieving from under oppression, turning to the God who is free to act on their behalf. Thus the prophet identifies and denounces injustice, and speaks to the inevitable toppling of unsustainable oppression.

Prophetic energizing (ch. 4) is the presentation of an alternative way- a new vision for a newly formed people called together to live out the vision. This vision is anchored in the freedom of God to act as he wills, and his refusal to be domesticated by kings and/or priests to serve the royal purpose. God challenges this imperial way with a prophetic word which declares God’s freedom and sovereignty to act, to tear down the unjust royal consciousness, and lift up the oppressed. Thus, the prophets of Israel, and prophetic leaders of the Church in present are called speak boldly of a way other than the prevailing culture, but a way which infuses hope, purpose, and vocation into the community of faith.

This vision of criticism through embracing pathos and energizing through providing a basis from and for amazement and imagination of the possibility for a new way, finds its greatest model in Jesus of Nazareth (ch. 5). Brueggemann walks through the incarnation, ministry of compassion, suffering, death, and resurrection of Jesus to show how Jesus enters the suffering and lamenting of humanity, destabilizes power structures, and announces their imminent demise, but also provides a new word of hope and amazement as he overcomes death through being raised, and calls his followers to a life which is lived out in acts of mercy (the ultimate anti-imperial way) which speaks into existence a new people with a renewed purpose (ch. 6); living according the vocation of mankind as defined by God’s character rather than the royal consciousness.

Finally, Brueggemann connects this prophetic imagination to the practice of ministry in the contemporary church (ch. 7). Brueggemann insists that arena for this prophetic mission is in the parish, that the life of the local congregation, is where the criticism and energizing is focused. In other words, those in pastoral leadership, elders, and leaders of ministry programs, are called to embrace the pathos of their people, facilitate lament, and “penetrate the numbness” (117) which comes from complacency under the weight of the royal ideology and immense pressure of the prevailing culture to acquiesce to the agenda of the powerful. Prophetic ministry in the local congregation must also propose a vision of alternative way to be made manifest in the local congregation itself- to become a community which embodies the way joy, compassion, and justice of the Kingdom of God, and lives it out in the public arena.

Brueggemann captures beautifully the essence of the prophetic leader. He traces this task of criticism and energizing through Moses, Isaiah, Jeremiah, Hosea, to the climax of the redemptive story in Jesus. He astutely picks up on something often overlooked. The “doom and gloom” image of the prophet quite misleading, and this is a helpful corrective. The prophet is a counter to the royal/imperial agenda. A prophet, in the Old Testament tradition, is called to identify, name, expose, and indict exploitation and oppression, and to rally the people to cry out to God for help, and to call the people to live in a renewed commitment to the ways of mercy, justice, and righteousness. The task is a difficult one; a call to suffer with the oppressed, and work against the current, to come up against the denial, numbness, and despair of those who either bought into the royal consciousness, or have given up against the juggernaut of injustice and imperial oppression.

Brueggemann captures the beauty of the Kingdom-at-hand message of Jesus. He comes to not only suffer with and for his people, but to bring the word of hope and joy of the Kingdom breaking into the world to undo the powers-that-be, to critique the prevailing culture, and declare the inevitable demise of existing oppressive power structures and the ideologies behind them. Brueggemann’s prose is unparalleled in theological scholarship. He is able to write solid, profound, intelligent theology with true artistic craftsmanship.

But Brueggemann doesn’t just leave with an abstract, but connects the big picture of Scripture with the rubber meets the road of of the local parish/congregation. His word becomes useful, tangible, liveable. His words are convicting for us pastors, who have a weekly opportunity to speak to these things, and are called be leaders of lament, prayer, grieving, and bringers of hope. The ministry task Brueggemann places in front of us is hard, but it is good. His precision and clarity brings the word from ancient Israel to bear on a very different context. Pharaoh goes by a new name now. But the nature of the royal ideology is very much the same.

Where I think this work comes up short or could use some reworking is really somewhat nitpicky.The first issue I have with this book is that there isn’t more of it (a mere 125 pages without endnotes; which I find so annoying- footnotes for the win!). It’s compact to the point where it’s conciseness becomes a weakness. I would have preferred to have Brueggemann sit longer with different texts. One can feel like there is more in the words of Scripture to be explored in this book. Instead, Brueggemann moves on a bit too quickly from one text to another.

The second issue is that Brueggemann seems to make “prophetic ministry” less prophetic in the traditional sense of the prophet. Scripture seems to present the prophet as a very specific ministry of proclamation. Brueggemann seems to move boundary markers a bit to pull all public ministry under the umbrella of prophetic ministry. Pastor ministry certainly includes what Brueggemann is calling for; sharing in the pathos of the people, facilitating mourning, and helping to move people from a place of lament towards hope. But is this “prophetic”? Not in the traditional meaning of the word. This is pastoral. The New Testament does seem to make the distinction between the two (most obviously in 1 Cor. 12) though the text certainly doesn’t preclude the possibility (or perhaps inevitable?) overlapping. I think Brueggemann’s terminology pushes things a bit.

Brueggemann is a must for all students of theology. He is able to bring together exegesis, spiritual theology, praxis, and art in a package to make the text of Scripture something which can, and must be lived out- not just as moral demands, but as a story we join into- the message of the Kingdom of God coming into the present age to tear down oppression and injustice, and bring peace and joy through Jesus Christ. Only when the message of the prophets are examined from multiple angles, as Brueggemann has done, do we understand but also benefit from the text in our striving for kingdom living. This book calls on God’s people in the present to join a story, to reflect what has come before, and speak into the present to shape the future for God’s people. Brueggemann gives us not just an explanation of what was written, but a vision of how that text becomes a model for us to live into God’s ways.

One Comment on “A (Sort of) Book Review: The Prophetic Imagination”