Posted on August 20, 2015 by centrestreetbaptist 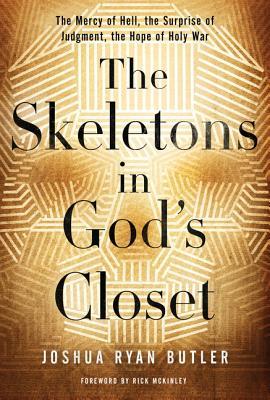 Joshua Ryan Butler. The Skeletons in God’s Closet: The Mercy of Hell, the Surprise of Judgment, the Hope of Holy War. Nashville: Thomas Nelson, 2014.*

I have already reviewed part one of Skeletons in God’s Closet (which deals with the issue of hell) on the Rethinking Hell blog. This post will unpack parts 2 & 3.

Part 2 (“The Surprise of Judgment”) unpacks the issue of God’s coming judgment, which makes so many very uneasy. Butler begins with the story of his friend, a man of Native American background, with significant (and completely understandable) anger at the Church for its injustice and sin towards himself and his people. Jeremiah had discomfort with the notion of judgment day, when God would send non-Christians to hell, and welcome Christians into Heaven. This is the caricature which Butler seeks to evaluate. Butler insists that judgment is actually good news, because in God’s judgment, the sins and injustices are exposed, laid bare, and shown to have not been forgotten or overlooked. In the present, sins often go without notice or consequence and perpetrators seem to have exploited others without any sort of penalty. Sin holds sway over creation because it has not been dealt with. And so Butler argues that judgment is the remedy for this; “God judges the world to heal creation.” (117). Judgment is a means remake creation, to condemn sin, and remove it so that creation can be liberated from the effects of sin.

The scene is depicted in Scripture as a wedding banquet. God is inviting all to his celebration, and judgment is there to exclude those things which don’t belong- the “wedding crashers” (141). Aside from a few exegetical blips (like the statement that the older brother in the parable of the prodigal son “remains sulking in the backyard” which is not actually recorded in the text [170]) and a weird evaluation of Edwards’ famous sermon “Sinners in the Hands of an Angry God” (which Butler says is directed to the Church, to insiders, “a housecleaning tool”, which may be true, but misses the overall, stomach-churning awfulness of the message and the tactic of using fear to motivate behaviour modification [136-7]), this section was probably the best of the three. I still think it comes up short, but I am encouraged by his emphasis the judgment is about establishing God’s justice in response to the injustices of history. Judgment isn’t about God picking favourites, and penalizing people who haven’t heard the Gospel for being born in the wrong time and/or place. Butler emphasizes the idea that there will likely be surprises on judgment day, which I think echoes Jesus’ words in the Sermon on the Mount well.

Part 3 investigates the notion of holy war. Butler explores the often maligned texts of the Old Testament, especially Joshua and Judges, which on the surface give the impression that God commanded a genocide. He begins by depicting holy war as people using God or the gods to justify wars which the planners are already confident they can win, and have the resources (weapons/people/tactical advantage) to win (in other words, holy war rhetoric is more about convincing the populace they should get behind the project) and that the notion of holy war is used to justify war because the invaders are culturally superior- the “God favours us” propaganda (209-211). Butler then looks at the text to see where Israel’s historical accounts do or do not line up. But there are a few problems. While he is correct to point to holy war rhetoric as more propaganda than real substance, his definition of holy war seems arbitrary, and when he unpacks Israel’s story in light of this definition, he overlooks several things.

Butler argues that Israel, during the conquest of Canaan, was the ultimate underdog. They were a small, crudely equipped people, attacking a military juggernaut- an “imperial” force. The evidence doesn’t support this though. The Book of Numbers provides a number North of 600,000 men (whether this number is accurate or not, I’ll leave to other folks) who could potentially be used in battle for Israel at the time of the Exodus. How well they were equipped isn’t completely clear, and not all off this potential force was taken into battle (Josh. 4:13 gives the figure of 40,000). But at the time of the conquest of Canaan, the region was made up of smaller political entities- city states, which may have had fortifications, but were not co-ordinated by any centralized government. Jericho and Ai were essentially on their own when Israel attacked. And both cities were likely only a few thousand people. Israel is hardly the underdog. The walled cities may have been able to withstand for a time, but a prolonged siege would have inevitably ended with Israel being victorious. The Amarna Letters reveal that the Canaanite cities were basically dependent on Egypt for assistance with defense. Canaan was not an imperial power, but actually under the sphere of imperial influence outside themselves. There wasn’t a Canaanite Empire/Kingdom to co-ordinate defense against a fairly significantly sized invader.

Butler uses this image of the underdog (which is unlikely) to suggest that Israel doesn’t fit the arbitrary definition of holy way he has constructed. This is a big problem for me. Then to illustrate how God doesn’t fight in the holy war ways, and uses underdogs to take down giants, Butler turns to David and Goliath. His reading has quite a few flaws. And I am convinced we need to re-evaluate our reading of that narrative.

While I agree with the need to critique notions of holy war, and the imperial ambitions of supposedly Christian nations should disturb us, and be repented of, we have to be careful not to allow that to rework the text to fit our agenda. Jesus never called us to form geo-political superpowers to invade other lands and impose ideological systems and exploitive economic policies for the glory of God and country, but I think revising Israel’s history in this way is to miss the point. The texts of Joshua and Judges are difficult. They need to be wrestled with. As far as the authors were concerned, God commanded Israel to burn cities to the ground and leave no one alive. That’s hard to swallow. It should be. I’m sure God hates the realities of those events and texts. But I don’t think Butler’s alternative reading fits the evidence.

My overall impression of the book: Butler is a great storyteller. When he writes about his friends and acquaintances and their struggles with tough notions, a very real, raw, and challenging picture emerges of the people with whom we are called to engage with the Gospel (and with that Gospel often comes the baggage of history sadly). I applaud Joshua for his courage to tackle the tough questions, both in his interactions with people, and in this book. I love him for it. I’ve interacted with Joshua via twitter and email, and find him to be a passionate advocate for justice, and friendly and genuine guy, who faithfully serves the Kingdom and promotes justice and shares Jesus with his community and the globe. I think Skeletons in God’s Closet can serve as a solid discussion starter- a jumping off point for others to wrestle with the questions of hell, judgment, and violence in their own minds and with their own communities. I’d encourage people to read this book in book clubs or study groups, to ask questions and engage his suggestions.

However, I lovingly disagree with Butler’s conclusions. He asks the right questions, but he and I land in very different places. I think his depiction of hell as sinners left outside the city in a dreary and joyless eternal existence doesn’t fit with what Scripture depicts (death, perishing, destruction, excluded from life in the age to come). I do think judgment is about cosmic healing, but there is still an element of judgment on people who have been unrepentant and hostile to the Gospel. I do think holy war is something which grieves the heart of God. But I don’t think the evidence supports Joshua’s underdog version of events. I am encouraged the Joshua has a platform to engage the Church with these questions. I am hopeful that those who identify with Jesus can graciously grapple with some very difficult stuff in our Scriptures and in our history. And I really do hope Skeletons in God’s Closet will be a catalyst for that journey.

*A free copy was graciously provided by the author (who’s a totally rad person, even though we disagree) for the purpose of review. Thanks to Joshua for providing this for engagement.

This entry was posted in books, hermeneutics, Kingdom of God. Bookmark the permalink.