Posted on December 31, 2014 by centrestreetbaptist 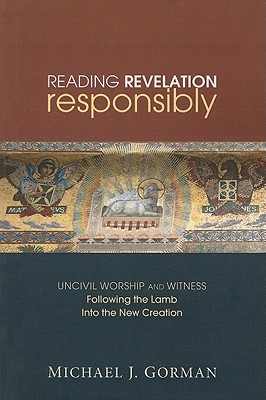 I had, for a long time, bucked against any notion of preaching on Revelation. Ok, maybe chapters 1-3; lots of compelling challenges for the church there. But the rest of it was a bit too dicey. Then I began to read more, and really became convinced of wonderful, sermon ready content in the throne room scene of chapters 4 & 5. Ok, but from chapter 6 on, no way. But more and more, I’ve come to see the value of a close reading of Revelation for discipleship, and for preaching. Of course, Revelation must be read with care. Many have gotten into weird and wild places because of the way Revelation has been read (part of the reason I hid from it).

So, as my interest has grown a bit more (not enough to really tackle Revelation in the pulpit yet) I’ve gathered a few resources, and recently picked up this volume by Michael Gorman. Since reading Inhabiting the Cruciform God earlier this year, I’ve become a Gorman fanboy. Sure, I haven’t read much of his stuff, but I immediately identified with his writing, and it resonated in exciting ways. I’ve generally carried tension with a lot of various things within evangelical theology, and Gorman has been incredibly refreshing. His emphasis on cruciformity, discipleship, formation, and union with Christ have been a breath of fresh air which evangelicalism needs so badly. He skillfully draws out the beauty of the Gospel and frames the New Testament in what I would argue is a more accurate and responsible way. Similarly, evangelicalism needs more responsible, sane, and responsible readings of the Book of Revelation. So, I figured I could count of Gorman to bring something valuable to the table. He didn’t disappoint.

Reading Revelation Responsibly is designed to counter various misreadings of Revelation and set up a more contextually sensitive and responsible approach. Whether hyper-preterist, or dispensationlist or sundry other extreme readings, Gorman aptly cuts down these readings to get to the core of what Revelation is about. This book is a very good hermeneutical guide to managing a difficult text well. Gorman capably debunks problematic readings like those of Hal Lindsey’s The Late, Great Planet Earth and the very popular fiction series Left Behind with their sensationalized Armageddon and rapture focused readings. Gorman dismisses all the rapture readings, and develops a much more contextually sensitive reading. Historical situation and literary genre considerations (properly understood meanings of “apocalyptic”, theopoetic, and pastoral writings)  are explored to demonstrate the shortcomings of dispensational and the various other improper readings of Revelation.

Gorman argues that the main purpose of the book is what he sums up in the subtitle of the book, “Uncivil Worship and Witness, Following the Lamb into the New Creation”. In other words Revelation is meant to address a few themes:

Uncivil worship- rejecting civil worship of Rome, which demanded worship of state and Emperor in a fusion of religion and politics which was common in the ancient world. Christians are called to reject any worship of the state (thus, have worship which is “uncivil”). Thus, Revelation is a liturgical text- one that promotes proper worship. Through hymnic portions, Revelation exposes the throne centred worship which is to characterize Christian practice.

Witness- to be faithful witnesses (to the point of death if necessary) to Christ, who is the faithful witness. Thus, argues Gorman, Revelation calls Christians to testify to Christ, and speak faithfully of the person and work of the Lamb. While many would glorify martyrdom in the popular sense (glorifying those who die for their faith), Revelation speaks of martyrdom in the true sense of the Greek word, which means witness. So, whether or not death might result from Christian witness, the key is faithfulness in our witness.

Following the Lamb- Jesus Christ is throughout Revelation referred to as the Lamb, the one slaughtered but raised. The Church is called to follow him, obey him, be joined to him in suffering and death, which is then vindicated by God in the resurrection.

Into the New Creation- the promise of Revelation is that those who follow the Lamb away from civil worship, and remain faithful witnesses will share with the Lamb in his final victory of sin and death, and will participate in the new creation.

In other words, Gorman argues that Revelation is a call for Christians to reject the practices of the Roman world, and be radically committed to remaining faithful to Jesus Christ, a potentially dangerous choice, but one which will be vindicated in the new creation. Gorman also suggests that Revelation’s focus on civil worship has implications for his own context of 21st century America, with the potential trappings of American nationalism, which links the state to religious identity. He warns that American identity and patriotism may be capitulation to civil religion.

The one short-coming for me was the amount of space given to critique of American Civil Religion. While relevant, I am not convinced it warranted as much space as it received. For those of us outside of the USA, the book would not have been less impactful had the comments been removed, or reduced in size.

For the sake of full disclosure, I must state that my appreciation for Gorman’s take may reflect the fact that I already had an understanding of Revelation which mirrors almost exactly what Gorman has written here. At basically every point Gorman was stating a case which I had accepted based on other materials I have read on the subject. So this book served less as correction, and more as affirmation, which may skew my opinion in Gorman’s favour. But nevertheless, I do think Gorman’s case is very convincing, and would be an important, eye-opening, corrective to many.

Gorman is an accomplished scholar, and some of his other work is quite technical. This however, is far more manageable for the average reader, and can be understood by the vast majority of people. It still has some theological heft to it, but is written in such a way to make it suitable for folks with little formal theological training, but with a sincere interest in understanding what Revelation is really about. This is a very important resource for pastors and laity. To anyone really interested in the book of Revelation, I would absolutely recommend this book as the go-to guide to be read as one reads what is perhaps the most difficult to understand portion of Scripture.

← A (Sort of) Book Review: Unlocking Romans
Being a “Let Us” Community →