Posted on August 29, 2014 by centrestreetbaptist 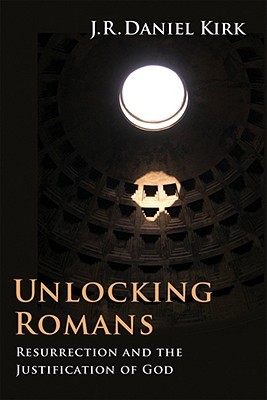 Daniel Kirk is quickly becoming one of my favourite authors. His Jesus Have I Loved, But Paul? (review here) was mind boggling good. Unlocking Romans, Kirk’s first book, sat on my shelf for a sadly long time (almost a year before I got into reading it). But I finally broke it open and it took a long period to get through it all. It’s a highly academic monograph, which requires moments to pause and unpack. Kirk challenges many protestant assumptions about soteriology and heremeneutics.

Kirk’s thesis is two-fold: Romans is a “theodicy project”. It is Paul’s resolution to the challenging question how can Israel’s God be considered faithful when Israel is in painful subjugation to other nations. Why are God’s covenant people still in exile if YHWH is creator, sovereign, and good? And the response Paul has is the resurrection of Jesus declares that yes, the God of Israel is faithful. He has begun the vindication of himself and his people by raising Jesus from the dead, so that those who are in the messiah become inheritors of the promises of Israel’s God.

Second, the resurrection of the Messiah becomes the lens by which Israel’s scriptures are to be understood. All of Israel’s hopes and understandings of the promise are reread in light of the resurrection. In other words, Paul reads Israel’s history and Scriptures through a resurrection hermeneutic.

I’m often amazed at the way resurrection is missed in Pauline soteriology among protestants, especially in Romans. Kirk does a fantastic job at answering the questions, and articulating some of the thoughts I’ve had for many years. Richard Hays, in his blurb on the back cover captures this sentiment: “Many readers will come to the end of this book saying, ‘Yes, of course; why didn’t we see that before?'” Kirk has provided an essential challenge to deeply ingrained assumptions about penal substitution as the central tenet of Paul’s theology and the central argument of Romans. Kirk rightly (in my opinion) recasts the thesis of Romans as not in 1:16-17 (the Gospel is God’s salvation), as is often assumed, but is found earlier in Romans- 1:1-6. Thus, Kirk reorients the content of the Gospel. As has been argued astoundingly by Wright and McKnight (among others) the Gospel is not soteriology. Instead the Gospel is about Jesus, the one promised in the Scriptures, fulfilling the promise, as a son of David, who has been revealed as Son of God and Lord over all through the resurrection, and this promise has created (and is creating) a new humanity, a new people of God which includes both Jews and Gentiles. This important factor is needed in Pauline discussion, and I for one welcome this important rereading Romans. Romans is not about penal substitution, but about how Jesus fulfills the promises of God to vindicate himself and his people, and this comes about through Jesus, who was crucified and raised.

Kirk’s thorough analysis of the sweep of Romans demonstrates how Romans is permeated by resurrection language. At all points it seems that the resurrection lies as key to understanding all debates about God’s work in his creation. Instead of dealing with Romans as separate propositions, dealing with various aspects of doctrine, Kirk embraces the sweep of Romans as a letter with a single purpose and various components coming together to argue that in the resurrection of Jesus, God has fulfilled his promises to be faithful to his people and bless all people through Israel and remake and renew the creation.

Although there are definite hints of New Perspective on Paul (NPP) arguments, Kirk is engaging various sides and arguments. He engages the differing views of Wright, Dunn, Sanders, Moo, Fitzmeyer, Watson, etc. Although much of what is presented seems to lean towards NPP and shares more in common with Wright than Moo, he is still critical of both sides.

Kirk’s thorough analysis, although highly technical (you’re going to need some Greek for this one) is still presented in a way which makes it clearly relevant, beautiful, and practical. In the final chapter(s) Kirk points out that we are drawn into the people of God, filled with the Spirit, and dwell in the bifurcated, already but not yet reality, living in the eternal life brought to us, but also part of the present age. The age to come has broken into the present age where sin and death have asserted power. But, with the Spirit’s presence we bring the age to come to bear on the present. We live in a way that demands we make resurrection relevant to how we function in the here and now. So, Kirk is not simply interested in theoretical pontification, but his analysis of Romans calls us to know God has given his answer to the challenge “where is God?” with the answer resurrection and new life, available now, through the spirit which allows us to live for God now, and not simply await the day when we are freed from the evil of the material world. Kirk exposes the crypto-gnosticism in so much theology where earth is heaven’s waiting room. Instead, Kirk shows us that Romans points us towards life lived in the Messiah now as a foretaste of the age to come.

Unlocking Romans is a wonderfully refreshing take on Romans. For several centuries- at least since Luther- Romans has been all about salvation from sins through the atoning death of Jesus and not by works. Instead Kirk has, by tracking the sweep of Romans, demonstrated how Paul’s theology is centred around the hope of new creation which God is faithfully bringing about, defeating sin and death by the resurrection of Jesus from the dead. Kirk has, in my mind, captured the heart of Paul. Kirk has shown how Romans declares the gospel of Jesus Christ, promised messiah and fulfillment of God’s faithfulness and vindication of himself because he has shown himself faithful to the covenant.

Kirk has provided a beautiful depiction of Romans which captures the whole of that letter, and has drawn out of the dynamic of resurrection as the solution to the theodicy question. God has shown himself faithful in the risen Lord. Kirk has astutely captured and presented the Gospel according to Paul’s letter to the Romans. How the protestant world has frequently missed what Kirk has noted is shocking, and hopefully will be corrected more and more. The more this book is read, and the more we are pushed to rethink our assumptions about Pauline theology generally and Romans specifically, we will open our eyes more and more to message of new life which is really at the fore of Paul’s words to the Roman Christians.

This entry was posted in books, gospel, Jesus, Kingdom of God, New Testament, Paul, Romans, Stuff I Like, theology. Bookmark the permalink.