A (Sort of) Book Review: Inhabiting the Cruciform God

Posted on April 4, 2014 by centrestreetbaptist 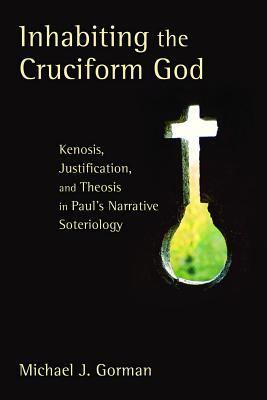 This book had been on my “wishlist” for several months, and I finally grabbed it as my Lenten reading; a transition from the Pauline stuff I’ve been working through since last Spring, leading into the Lenten reflections of the movement to the cross (and specifically how it is protrayed in Mark’s gospel as an intentional journey into which we are invited). I ended up chewing through it about a week and a half into Lent. It was just that good.

In Gorman’s own words:

The basic claim of this book has been that Paul’s soteriology is best described as theosis, or transformation into the image of the kenotic, cruciform God revealed in the faithful and loving cross of Christ, and that Spirit-enabled theosis is the substance of both justification and holiness. Justification is participatory and transformative, accomplished by co-crucifixion with Christ and embodied as holiness. (p. 161)

That’s quite a mouthful. In other words, Gorman is arguing for an integrated view of justification, sanctification, christology, theology, pneumatology which all comes to us through union with Christ. The believer finds justification and sanctification by “inhabiting” the Messiah, and in so doing is transformed by the Spirit to become like God (theosis) because God is cruciform (cross-shaped). God’s character is revealed most fully in Christ and his crucifixion, which mean in becoming “co-crucified” we become like Christ, and thus, like God. Holiness is the reflection of this character. We become holy when we become like Christ, by the power of the Spirit.

Chapter 1 is an adaptation of an earlier article by Gorman on Philippians 2:6-11 discussing the translation issues with “although he was in nature God”, which Gorman proposes is grammatically correct, but when probed deeper, the rhetorical model of “although [x] not [y] but [z]” creates a situation in which it could be rendered causally- “because he was in nature God”, which would mean Christ’s kenosis is not in spite of his Divinity, but because of it. God is thus kenotic by nature. God is self-emptying, giving, sacrificial. This is not a case of the Divine Son acting differently than the Father, but being faithful to the Father’s character.

Chapter 2 is the main “guts” of the book, dealing with the idea of justification by co-crucifixion. Gorman argues that justification by faith was understood by Paul as “new life/resurrection via crucifixion with the Messiah” (p. 44). Here Gorman makes an important distinction between Sin and sins. Justification is sometimes reduced to payment of the blood-debt incurred by sins. But Sin in Pauline thinking is a personified power. In co-crucifixion the power of Sin is dealt with (the old self is crucified with [sustauroó] Christ [Rom. 6:6, Gal. 2:20]) , not simply Christ crucified as the payment for the debt owed by human beings (49-51). As a result justification consists not just in restoration of relationship with God by cancelling/paying a debt, but is about restoring right covenant relationship with God and other people. Justification is transformative, changing our interaction by Spirit-enabled love and righteousness towards others, thus enabling covenant fulfillment, ending Sin, and manifesting holiness. Thus, justification alters/heals/restores not just the Divine-human condition, but the condition of humanity within itself. This isn’t to say of course that justification is earned by our righteous behaviour to each other. It is still a passive thing, received from God, in Christ (via joining or participating in him and his crucifixion), enabled and encountered by the Spirit.

He continues in chapter 2 by depicting justification as theosis, becoming like God.  He argues “justification is participation in the faithfulness and love of God. It is thus a process of deification or theosis” (90-91). Justification must be applied in becoming conformed (by God as agent) into the image of Christ.

Chapter 3 develops theosis further, and explains the relationship of theosis and holiness. Gorman says “holiness, or sanctification, is not an addition to justification but its actualization” (111, emphasis original). Holiness is thus justification played out in reality; holiness is justification manifested/embodied. Human holiness is participation (koinonia) in God’s holiness (ie. by union with Christ and the indwelling of the Spirit manifesting itself in our living a cruciform life).

Chapter 4 turns to the idea of nonviolence as inherently part of God’s personality. It is through the non-violent response of the word that Jesus demonstrates God’s covenant faithfulness, and God’s solution is not to respond to violence with violence but with new life- resurrection.

Gorman’s depiction of Paul’s participatory view of justification by co-crucifixion is virtually identical to my own view, but also broader and better worded. I felt myself being in almost complete agreement with everything Gorman has proposed. This book is the one I’ve been wanting to read (without my even knowing it until I’d read it). I’ve always been unsettled with the idea of justification as a “balancing of the books”; a payment of debt. Skeptics of the penal substitution model often see in it an abusive father who has to do violence to someone, and Jesus as a lightning rod, misdirecting wrath (it’s obviously an unfair image but one can understand why people could get that impression). The Christus Victor model has been appealing to me, but not fully as it doesn’t embrace the fullness of the imagery in the New Testament. Gorman manages to bring various streams of thought together, and presents a beautiful image of salvation which is logically consistent, scripturally faithful, and without the sometimes fragmented view of justification and sanctification (the ordo salutis has never sat right with me, as I see a more integrated depiction in the NT and Paul especially).

By drawing together the various streams in a gracious way, Gorman is able demonstrate an integrated, holisitic view of God’s outworking of new life. Unlike other works, Gorman here is able to bring together a picture which, unlike some more terse depictions of justification, enable us to see a God “gracious and merciful, slow to anger, abundant in covenant love and faithfulness” (Ex. 34:6).

The only issues I had pop up more in stylistic features than theological one. Chapter 1 is very technical, and occasionally repetitive. When you read through the whole book, it does occasionally feel as though you’ve read the same paragraph several times over. He regularly comes back to the same point to remind the reader of the thesis and centrality of justification by co-crucifixion and cruciform character of God revealed in the kenotic work of Christ. This can be advantageous if done well. Gorman doesn’t do it as well as it can be done.

Secondly, because the first chapter is an adaptation a previously published work, and other portions are adapted from other research Gorman has done, it doesn’t hold together the way it could have; the flow between chapters doesn’t feel completely organic.

Gorman does bring together intensely researched, and clearly conveyed technical work in the Greek text, with an array of research of recent Pauline scholarship to present a picture of Paul’s theology of justification as beautiful expression of an extension of the person of God fully and wonderfully displayed in the cruciform, kenotic Messiah Jesus. Gorman convincingly leads us to a God who, because of his covenant faithfulness cries out in the midst of the power of Sin to use Sin’s power against it. Through non-violence, Christ has demonstrated the power of love, and defeated Sin by drawing us into him, and through the Spirit, conforming us to him that we might share in his crucifixion and through that share in his resurrection.

What Gorman has given the reader (pastors, students, and well-read laity) is well laid out demonstration of the work God has begun in Christ and the means by which he will see it through to completion. While this won’t likely settle all debates about Pauline soteriology (published five years ago, and the battle rages on) but will encourage those sifting through the messiness of the heated discussion of the present scholarship and find a place where various threads meet. Gorman has argued well for a participatory reading of Paul in which his doctrine and the narrative of the crucified and risen Messiah are virtually seamless.

← Murder in the Fifth
Jesus: “An Unexpected Messiah” →