Posted on December 20, 2013 by centrestreetbaptist

This small (88 pages) resource by John Allen Bankson came to me at an appropriate time. While prepping and leading advent services at Centre Street, I began working through this book with high hopes for orienting the worship and sermons for the Advent Season. Bankson (pastor of First-Trinity Presbyterian Church in Laurel Mississippi) apparently has earned the nickname “the Advent Guy” because of his emphasis and resource collection with regards to following Advent. He makes reference to his “manilla envelope” of Advent stuff (ideas, readings, hymns, visuals, etc), which he unpacks in this book, and his somewhat against the grain approach to Advent for many protestant traditions (including his own).

Basically, Rekindling Advent is an apologetic of sorts for the Liturgical Calendar. Bankson advocates for the use of the traditional practices of marking seasons, and following the preparation-celebration-reflection pattern of the Church Calendar. Baptists typically don’t follow the calendar strictly (or not at all). We “observe” Advent and Lent, Easter and Christmas, but not in the traditional sense of the calendar. Advent often becomes the “Christmas Season” (an extended Christmas lasting 4+weeks) in which we reflect on the incarnation. This, as Bankson points out, is not the traditional way of Advent. Advent is preparation, almost lamenting, a longing for God’s work. It is a time of pausing, stillness, waiting expectantly. Yet, most Westerners fill the pre-Christmas season with shopping, baking, visiting, celebrating (not bad things per se, just not really Advent). Bankson draws us back to the calendar. Advent is the beginning of the Church year. A time we are to pause, look to God with hope and stillness, expecting him to act in history. It is a time when we connect to pre-Christ times in longing for the arrival of Messiah, and long for the second coming. Christmas celebrations are therefore to begin at sundown on December 24th, and last until Epiphany (12 days later- hence the 12 days of Christmas, something I ashamedly was not aware of). Epiphany then lasts until Lent, the preparation for Holy Week (Palm Sunday-Holy Saturday) followed by Easter which lasts until Pentecost. Pentecost then concludes on Christ the King Sunday (last Sunday before Advent). Bankson includes this helpful graphic (pg. 50): 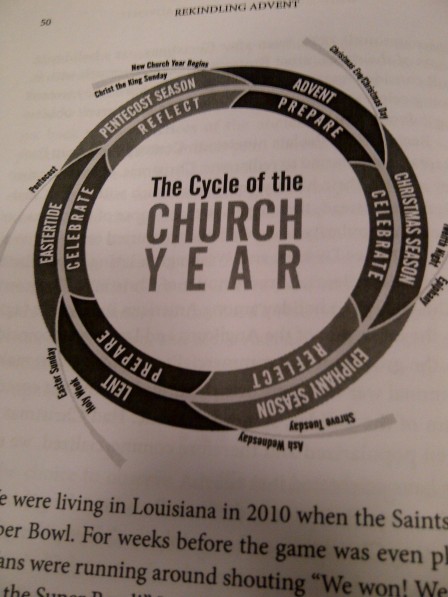 Chapter 1 asks “Should we celebrate Advent?”. Bankson obviously says yes. Although not biblically mandated, the tradition is very earlier, and designed with the intent of remembering and recalling the Gospel story. Bankson counters the arguments that the calendar “binds the consciences” of the people, by saying no moreso than the pastor’s selecting of texts and worship songs. In chapter 2 (“Why Should We Celebrate Advent”), Bankson argues that by continuing to recall to mind the mighty and gracious works of God, we create a rhythm of remembering, and celebrating. We embed the gospel proclamation into our lives. Although not required by any specific biblical texts, Bankson looks to 1 Cor. 10:23 “all things are permissible, but not all things are beneficial” and asks, is the liturgical observance of Advent beneficial, and concludes that yes it is, because it “fills out the gospel story” (p. 33). He further argues that observing Advent will help resolve the tensions of “Christmas Creep”- the phenomenon of commercialism driving Christmas shopping season earlier and earlier. If we define the period before Christmas as a time of longing, waiting, hoping, praying, we can avoid the risks of the cultural norms of Christmas commericialism.

Chapter 3 (“When Should We Celebrate Advent”) directs us to the natural rhythm of the Liturgical Calendar (see graphic above). The first Sunday of Advent is the Sunday following Christ the King Sunday, and Advent encompasses the four Sundays preceding Christmas (typically). Although variations are used by some, this is the typical pattern of things.

In chapter 4 (“How Should We Celebrate Advent”) Bankson opens us his manilla envelope and outlines some of the options for different types of Advent observances. He outlines the various Advent wreath traditions, readings, hymns, liturgies, etc. which he has collected over his years in ministry. He provides examples of Advent service outlines, the “Jesse Tree” (which I had never heard of), the O Antiphons, and various celebrations used in some traditions.

As I noted, Baptists rarely (if ever) stick to the Liturgical Calendar. We generally create a rhythm of the ministry year, marking the kick offs for kid’s programs, church picnic in June to mark the slowing down for summer, etc. Many do Advent wreaths, Christmas Eve services, some sort of Lenten observance, Palm Sunday, Good Friday and Easter Sunday. But beyond that, we generally don’t interact with the traditions associated with the calendar. We may do a Pentecost Sunday, but Epiphany, Christ the King, etc are typically not used. I began in 2012 doing Trinity Sunday, which was new for most (perhaps all) in the congregation. But I do like the idea of having some rhythm to the year, as Bankson is arguing for (especially since we all too often integrate secular holidays into our worship; eg. Mother’s Day, see pp. 17-18). His reasoning is solid- embedding in our lives the playing out of the Gospel is a beautiful way to bring to mind the various means by which God has made his mercies known and available.

Bankson’s resources are helpful, especially for those only beginning to interact with the Liturgical calendar. Recognizing the difference between an Advent Hymn and a Christmas Carol is new to many in some circles (like us at Centre Street). A gentle introduction, and simplified instructions is wonderful for newbies. He doesn’t assume that the reader knows the terminology (e.g. he provides a simple, one sentence explanation of antiphons). He also introduces these practices with built-in flexibility. He doesn’t imply that there is a “right way”, but emphasizes that depending on the needs, desires and experience of those coming to worship, most or all Advent traditions can be modified to fit better.

It does feel a tad lacking. At only 88 pages, it’s pretty light. A committed and fast reader could handle this in a single sitting perhaps. It’s not designed to be an academic (theological or historical) investigation into Advent, but a resource to help worship leaders and pastors to begin introducing congregations to Advent in a traditional manner. Even so, a little more “meat” would have been helpful. More historical research into the way these traditions came to be introduced and modified might bring more light on them. It would lend to the argument for using the calendar in general, and Advent specifically if some more in depth research was provided.

One small nit-picky thing does need to be noted, as it almost derailed my reading of this book (luckily it didn’t, as it didn’t become an issue in the unfolding of the book, as I initially worried it might). On page 18 we read:

What I had a problem with is not the suggestion that some churches (he would probably include Baptists under “non-liturgical”) teach isolated stories and fail to tie them together. My issue is the designation “non-liturgical”. Although many folks proudly boast the title, and insist that they aren’t liturgical, there is in reality, no such thing as a “non-liturgical church”. We all have liturgies. Liturgy is simply a set of customs used to express worship. It has come to associated with a specific set of customs, which some Christian traditions are not fans of (vestments, incense, processionals, recessionals, readings and scripted prayers, etc.). But all congregations have a set of things that they use to set aside worship as worship. We may make distinctions about types of liturgies or characteristics of liturgies, but when a congregation gathers for worship it has a liturgy, whether or not they admit to it. Not using the calendar does not mean “non-liturgical” but means the liturgy of that church is not bound by seasons (for better or for worse). The fact that I don’t wear robes to preach, does not mean I don’t have a liturgy, but means my liturgy does not include a dress code (a divisive issue for many, which I realize and respect). I think the terms therefore can become needless boundaries between congregations. It suggests an antagonism which is not really there. It’s a variation not polemic. It’s this or that style of worship and this form of liturgy or that. By making distinctions like this we risk demeaning the other. When one boast about being liturgical and describes another as “non-liturgical” one risks being perceived as saying “your form of worship is less because it doesn’t conform to my (superior) standard”. Just as, when a professing “non-liturgical” person refers to another as liturgical, it can contain dispersion against the other as “hollow superstition”. It happens. Too often, sadly.</rant> Fortunately this was a passing comment and not core to the book’s argument. Bankson advocates for the use of the calendar, arguing that it is beneficial, but he is certainly gracious to recognize that many may feel too bound or restricted by this tradition, and so each can select how much or how little of the resources available from the various traditions to incorporate.

Bankson (and Doulos Resources) has put together a fine tool for integrating various liturgical elements into the season. I would certainly recommend picking it up, and reflecting on how you and your faith community “do Advent”. This little resource is a good tool; not a be-all-end-all in terms of the theology of Advent (not that it tries to be), but a good piece to have on the shelf to glean ideas, and bring creativity and fullness to worship.

*A free copy was provided by the publisher for review purposes. Many thanks to Doulos Resources.