Live From Beirut pt. 2 Highlights of Wednesday and Thursday

Posted on February 7, 2013 by centrestreetbaptist 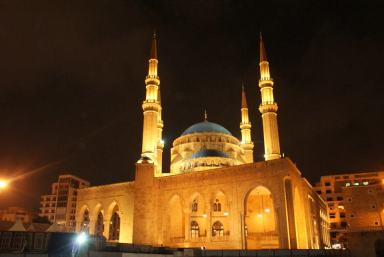 Today was another eventful day in my Middle Eastern adventure. Since my last post on Tuesday evening I’ve been in overload with information and experiences. We’ve got the rundown on the various things happening through LSESD and ABTS here in Lebanon, as well as getting a tour and insight into several of their ministries. Today we checked out SKILD (Smart Kids with Individual Learning Differences) and heard from Martin Accad, director of the Institute for Middle Eastern Studies (see their blog here) about Muslim-Christian discourse in the Middle East. We’ll get to hear more from Martin tomorrow.

Last night featured a tour of dowtown Beirut, with it’s all new, and very opulent, and Western appearance. We toured the Mohammad Al Amin Mosque, and the Maronite Cathedral of St. George and St. George’s Greek Orthodox Church, followed by an incredible dinner at local restaurant Al-Balad.

We were scheduled to go to Sidon today, but that got moved to Monday, and so we checked out the Gateway bookshop (operated by Lebanese Baptist Society’s publishing house) where I picked up an Arabic Bible (a weird habit I have, where I buy a bible in the language of every country I visit whether or not I can actually read it). This was followed by a trip to La Mall (yep, Beirut’s mall is just called La Mall) which was quite the learning experience, seeing the extent of Western influence, as this mall featured nothing but Western brands and many of the same stores we would expect in any North American mall. We were even able to indulge in a little piece of home, at Second Cup. 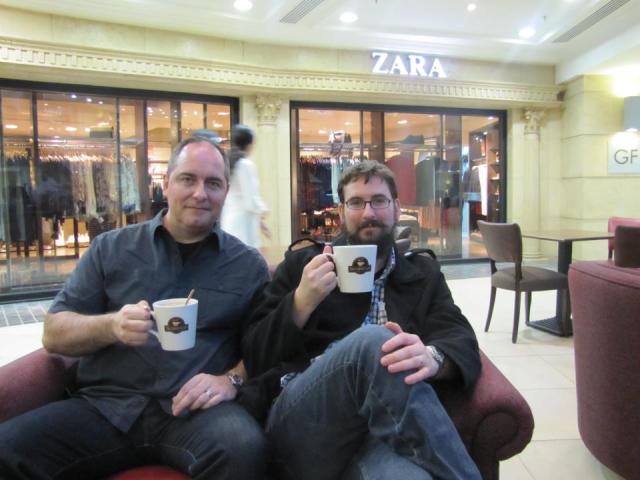 Dave and I enjoying a little piece of Canadiana

This evening we joined some of the Seminarians in a game of volleyball after dinner. A fun time, and very revealing regarding physical fitness (or lack there of). A good way to end a fun day. Can’t wait to see what tomorrow brings.

I’m sure I could go on and on about any or all of these wonderful things, but time does not allow at this point. But I will certainly be putting together more detailed and in depth thoughts and reflections later (likely after we get home). Stay tuned.

This entry was posted in church, culture, Kingdom of God, mission. Bookmark the permalink.

1 Response to Live From Beirut pt. 2 Highlights of Wednesday and Thursday