Posted on July 10, 2012 by centrestreetbaptist 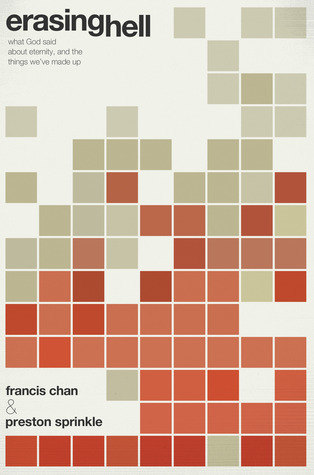 In my reading and reflecting on Hell for these posts, I picked this book at the local Christian bookstore. Erasing Hell by Francis Chan and Preston Sprinkle (Colorado Springs: David C Cook, 2011) is a response to  Rob Bell’s Love Wins, which I must admit, I haven’t read yet, but I’m now intrigued. Erasing Hell is meant to be an honest, biblical journey through the idea of Hell, judgment, wrath and how this fits with a God of love.

In many ways I find this book really helpful. Most people either don’t want to think about Hell, or rush past it and don’t really think through the implications. We all want to believe that everyone gets to heaven. It’s a nice thought. Very comforting to think “he’s in a better place now.” Chan and Sprinkle seek to grapple with the troubling prospect of eternity in Hell for a really seriously big number of people.

This book is not an academic piece of theology (not intended to be as best I can tell), but it is not exactly “light reading”. The approach of making something intellectually deep, but still manageable seems to be Chan’s way. He knows his stuff, without being “heady”. He is able to take an immense cross section of Scriptures, historical context and put them together in a way that makes sense to a broad audience. Chan is known for his speaking ability- passionate, convicting yet accessible (he preaches in ripped jeans and flip-flops on occasion- something I don’t think I could get away with… as tempting as it may be). Chan also writes like he speaks. His passion comes from real people, and so he connects his books to people he sees around him. In Crazy Love, he brings dozens and dozens of Scripture references together in such a way as to communicate to the young professional at Starbucks that God is right there, willing and able to be intimately connected to.

In Erasing Hell, Chan challenges his reader to ask, if Hell is real, shouldn’t it change how we look at the guy behind us in line at Starbucks? He/she may have to experience Hell in the future. If we really believe that, it means we have to get at this thing called Hell, and figure out how it connects to this God we profess to believe in. We can’t preach the gospel as “fire insurance” (Hell avoidance), but if Hell is real, it should motivate, and cause us to ask, can we really believe that God is loving.

What I love about this book, is that Chan is transparent and involved. He is not aloof and distant from the subject matter. It actually matters. He does not remove himself and write about Hell the way people write owner’s manuals for their lawn mower. He’s connected to it.

What Chan brings to the table, that others in theologically accessible circles might not, is addressing the Jewish mindset concerning gehenna. What did the people Jesus was speaking to think about hell? Chan & Sprinkle (one criticism of the book is the first person singular “I” when there’s two names on the cover- what’s Chan and what’s Sprinkle?) cover a lot of territory here, going through Jewish apocalyptic texts to demonstrate what background information Jesus original audience had. As I noted in my previous post, when Jesus talks about Hell it is not a detailed description. We get very little data. He talks about it as if the people who he’s addressing already know what he’s referring to. Why does Jesus not say, “So there’s there reality at the end of history you need to know about. It’s called Hell, and here’s what it’s like…”? Because people already have a conception of what it will look like when God calls all people to account. His audience had a doctrine of Hell. He didn’t have to convince them of it.

Usually when you’re reading a book which contains Jewish apocalyptic literature references, said book is likely several hundred pages thick, and the author has more letters after his name than in it (personally, I enjoy these books, but I would hardy pass them out to most people I know). Here though, Erasing Hell makes things more accessible for a greater audience. If you knock out bibliography, appendices, endnotes (one pet peeve of mine is the use of endnotes at the conclusion of each chapter. I, personally, MUCH prefer footnotes) and a “free preview” chapter from another of Chan’s books (kind of tacky of the publishers, if you ask me) it comes in at under 150 pages.

So, the big question- is it theologically sound? Well, that’s not a simple yes or no. It does uphold a fairly traditional view of Hell. The book is meant as a counter to Rob Bell’s universalism (the idea that everyone gets to heaven, and hell is corrective and temporary). He categorically rejects this view, using a somewhat problematic “prooftexting” approach (using isolated verses from here and there, which may or may not be within their proper context). He does ultimately suggest that the fire of Hell is metaphorical, and much of the imagery we connect with Hell is pop theology and that biblical allusions to fire are likely metaphors for the painful nature of punishment. However, Chan does conclude that Hell is eternal conscious torture (in future posts, I’ll say some things about universalism and annihiliationism). His decision seems to be based on a tough line of thinking- there are more verses which seem to suggest this than there are to suggest otherwise- kind of thing. That may not have been intentional, but that appears to be the case in his dismissal of annihilationism. He admits that there is some considerable evidence and a case can be made, but certain verses seem to point the other way. To me, this seems a little difficult. One can make certain hermeneutical arguments to skew verse in different ways. The language used to discuss hell is apocalyptic, poetic even. Part of me wants to say, “Francis, wrestle with it some more?” or “Francis, have you thought about this verse from this angle?” (see especially p. 106-108; Chan says that Hell is outside or apart in the New Creation- well, where is this outside? How is it out of the omnipresent God’s presence? Does this mean sin continues to have a place in the new creation?).

There are considerable strengths here- Hell is laid out there to be wrestled with, but then Chan and Sprinkle ultimately say, “yeah, what has always been the teaching of the majority of the Church is right”. It seems… disappointing… maybe that’s not the best word… But I expected more. Chapter 1 was a tad awkward at times. 2 and three were incredibly helpful in terms of laying out what’s there biblically and historically, but then things get a little less tidy and less thesis oriented. The later chapters are randomly arranged stories and passages which deal with goodness, suffering, love, wrath, etc., meant to convey the struggle of believing in a good God who sends people to eternal torment in Hell. It doesn’t hold together very well frankly. It seems… rushed. Like the publishers wanted this thing on the shelf before the pieces were crafted together better… like the sermon a pastor gives on a week where his schedule was too crowded… the points don’t connect, the argument is fuzzy, and there isn’t anything to hold it all together.

Is it helpful? Yes, at times. Would I recommend it? Depends who’s asking. This certainly isn’t something I’d use for an academic paper. It’s not something I’d give to someone who is not sure about Christianity and iffy on Hell. However, for someone on the journey who is saying “I want to know how to sort through where the prevailing ideas about Hell come from and how the fit with the Bible” this can be a solid resource. It’s a place where someone can get the vocabulary and survey of texts to start wrestling. But this certainly isn’t a comprehensive, close the debate, answer your questions kind of book.