Posted on January 11, 2012 by centrestreetbaptist 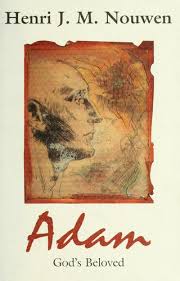 Adam God`s Beloved, Henri J.M. Nouwen. I am always looking for excuses to read more Henri Nouwen (as if I need an excuse). This one was “assigned” to me by my field education supervisor, as part of my journey through ministry with people with cognitive disabilities. In this book, Nouwen reflects on his friend Adam, who he worked with at L’Arch Daybreak, a ministry which brought revival in Nouwen, and lifted him out of a time of significant depression. Nouwen speaks of Adam as “an image of the living Christ for me” (p. 15). The severely limited Adam spoke humility, compassion, love, friendship and victorious joy in the life of the former professor, who felt empty after years in the academy. Nouwen seeks to tell Adam’s story as a means to speak of the power of the outcast to demonstrate the true love of God. 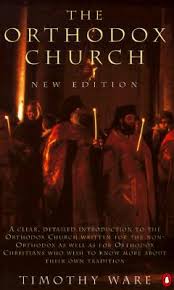 The Orthodox Church, Timothy Ware. a survey of the history,theology and practice of the Orthodox Church, this is probably the most concise and best composed by a “Westerner” (Ware is an Englishman, educated at Oxford, and a convert to Orthodoxy and a consecrated Bishop of the Archdiocese of Thyateira and Great Britain). Written in two parts (History & Faith and Worship) this book traces the practices of the Orthodox back through the cenutries, beginning with Apostolic Church, through the Roman & Byzantine eras, and gives special attention to the survival of Orthodoxy under Islamic and Communist rule. While it didn’t “rock my world” (like Ware’s The Orthodox Way did several years ago) it’s still interesting, and a worthwhile read. It does get a bit stale at times, describing the numbers at Monasteries, and breaking down the various groups under the Orthodox umbrella and who is in and not in communion with whom. But still, I find Orthodoxy a fascinating.

Credo, Karl Barth.  Swiss theologian Karl Barth’s commentary on the Apostle’s Creed. I worked through this one while preaching a series on the Creed. Found parts of this immensely helpful (particularly the first three chapters). But this is certainly not for the average reader. At times I found my head spinning.  It looks unitimidating at first, but this thing is dense. Highly abstract and philosophical, it isn’t always helpful for preaching, but nevertheless it is a monumental work, highlighting the depth of the Creed- which looks simple at first glance, but much can be drawn out of those seemingly simple words. What does it mean to believe in God? What does it mean when an Almighty God chooses to be intimate Father? Etc. For a church tradition which puts little significance on creeds, it was an meaningful divergence from the norm. 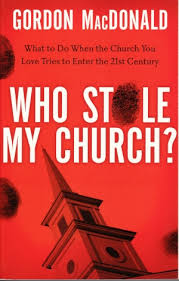 Who Stole My Church, Gordon MacDonald. Apparently Pastor Dorman went through this book with a group of our leaders a few years back, and they found it immensely helpful, as Centre Street began the long and difficult journey of changing some of ways we do things. Gordon MacDonald wrote this fictional account (based on all too familiar occurences for many Church leaders) of a Church which rejected a proposal from the leadership to make some upgrades to the sanctuary. Pastor Gordon pulls together a group of the opposition, and they reflect together on why the church seems divided, and what is happening in the hearts of those on both sides of the divide. What is revealed is that the Seniors feel like the Church they knew, which was their rock solid foundation was eroding, and even being “stolen”. This book is helpful in terms of framing change. How should the Church foster new ways of doing Church? How can traditionalists and contemporary worshippers co-exist? How can we reassure our people that change in the Church is nothing new, and convince everyone that change is about communicating the gospel in a clear and understandable manner, not about picking one side’s preferences over another? I still have a couple more chapters to finish off, but I am finding it helpful, although not really earth shattering revelations. But for a Church like Centre Street which has some varied opinions on the issues of worship, education and ministry models it’s vital to know how to discuss these things appropriately.