Posted on October 31, 2011 by centrestreetbaptist 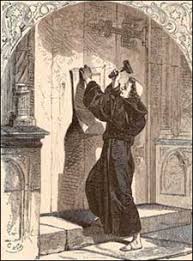 October 31st is somewhat unique- a 2 for 1 holiday special.  Hallowe’en shares the date with the less oft’ celebrated Reformation Day.  Although some propose Reformation Day celebrations as an alternative to Hallowe’en activities (see here) I would argue Reformation Day has less appeal to our culture in general, and realistically functions as Christians “hiding” out of fear of the “pagan” connections in Hallowe’en.  The draw of Hallowe’en is obvious- kids dressing up and parading, candy, social gatherings, etc.  Whereas Reformation Day as a “celebration” is fraught with problems.

I am inclined to agree with him on many fronts.  We often look to the 95 Theses in a romanticized and not historically accurate way.  Luther never intended what followed.  He had no desire to leave the Church, and he lamented the bloodshed which followed- as should we.  Countless died because Kings and Emperors decided they were entitled to end theological debates with swords, and use theological differences as an excuse to invade a political enemy.

When Jesus was preparing himself to be arrested, he prayed for unity among his followers (John 17).  Yet we burned, drowned, beheaded and murdered each other.  If we’re disturbed by the pagan connections of Hallowe’en, we should be even more disturbed by the astoundingly ungodly history of the Reformation.  Luther was right in confronting the practices of indulgences and monetary penance.  Ultimately he was successful.  But at what cost?  We preach one body, yet we’ve never been truly unified.  Even in Paul’s time, he was addressing a church divided.  The Reformation marks a renewed intensity of division.

“Let us therefore make every effort to do what leads to peace and to mutual edification.” (Romans 14:19)

“For God is not a God of disorder but of peace—as in all the congregations of the Lord’s people.” (1 Corinthians 14:33)

“Finally, brothers and sisters, rejoice! Strive for full restoration, encourage one another, be of one mind, live in peace. And the God of love and peace will be with you.” (2 Corinthians 13:11)

” Make every effort to keep the unity of the Spirit through the bond of peace.” (Ephesians 4:3)

This entry was posted in church. Bookmark the permalink.